Welcome to the Stitch and Seam!﻿ 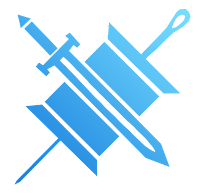 The Stitch and Seam started in 2012 to feature cosplayers and their skills. It has expanded to further explore topics on this community of nerds and crafters who enjoy sharing their favorite fandoms.


Vermilion Fire, also goes by Mercedes, is always looking to level up her skills in just about anything. She carves wood into swords and shields, makes PVC pipe bows, leather-crafts armor, metal works details, and more. She has won many craftsmanship and performance awards across the Western United States and judged at various conventions and events.

VFire founded the Cosplay Stitch and Seam Podcast and Blog to share her love of the culture and creativity in cosplay. Cosplay has been a huge part of her life for making new friends and trying new things. The hobby has helped her become more confident in herself and she seeks out others to help them find their inner strengths through crafting.


The Pannonator's Pan-Tastic Cosplays (just call her Pannon!) has been cosplaying since 2001. Over the past 17 years, she's refined her craft and competed all over the United States and abroad! Pannon has won over 60 awards nationwide. She and her cosplay-partner, Garnet Runestar won the title of Team USA in 2014 as part of the World Cosplay Summit, and got to represent the US again in June 2017 as Team USA in The Netherlands' C4 competition.

Though she still competes in the international circuit, Pannon has also judged for over 30 contests, returning as an Alumni Judge for the World Cosplay Summit, as well as several national cosplay contests. She continues her craft professionally in the field of costuming and fashion. Pannon worked as Lead Designer and Seamstress for a professional sports mascot company, where she built mascots for the Utah Jazz, the Denver Broncos, Chicago Bulls, Charlotte Hornets, and many more.

She is currently a designer, seamstress, illustrator, and pattern-maker for a local dress-making company that specializes in fanciful gowns for photographers and fashion shoots and runs her own brand of fashionable bags and accessories on the side.

David Jeffress has been an active, enthusiastic nerd for as long as he can actively remember. He fell in love with podcasts as a listener in 2015. Inspired by the myriad of styles he heard, he wanted to create something of his own and thus, August 10th, 2016 Dungeons and Chill was created. David plans to continue his podcasting pursuits so keep an eye out for future projects. When he isn't editing or recording, David is often spending time playing video games, reading comics or watching movies with his cats.

Maycey is a freelance music creator and epic mother of three. She loves her children as much as she enjoys creating music and aspires to create epic ballads for video games someday.

Finding the right sewing machine can be a real pain. Some machines are very intimidating, while others make you wonder if they will last during your project. Also, how do you take care of one once you have it? Shining Sakura is very passionate about her sewing machine and has been doing research on how to find the right one. She also has some great advice on maintenance and repair.  Here is what Sakura has learned. Enjoy! * There are pro/con cards throughout the article. If you have any questions about what you see here feel free to contact VFire on the Contacts/Links page. Sakura's Sewing Machine Guide Sewing machines come in all shapes and sizes. The one question many people ask is which one should I buy? Well that all depends on your budget and purpose. Here is a simple guide to help you determine which machine is best for you! You do not have to follow this advice perfectly but it can give someone an idea of what to look for in a sewing machine. All That is Old is
Read more

Time to get these posts caught up to the podcast! - cracks knuckles - here goes something! this first grouping covers a lot waxing strong about conventions and good memories!! Episode 73 - Cosplayers in the Time of Corona This episode aired back when quarantine was in full swing here in the states and we really had no idea what the rest of this year had in store. I feel the overall message is still the same: "It is okay to feel the way you feel. Take your time; you are not obligated to be creating during this time." Episode 74 - Making Friends at Conventions As we wax fondly over conventions, we had a listener question come in about how to make friends at these big events. What are your thoughts on this? Episode 75 - Convention Traditions We miss conventions a lot! We share listener and personal traditions that have become near and dear to us over the years. What are your favorite convention traditions? Episode 76 - How to Play the Ribbon Game Rennagade Cosplay joins us t
Read more

As promised, James of the Cosplay Armory shares his knowledge on how to make Auron's Katana from the game, Final Fantasy X.  I have been very excited for this as I followed his page as he worked on the blade. I hope you enjoy it! - VFire Auron's Katana Build by James A note before I start. I will be mentioning the use of several machines that I have the luxury of having in my shop that I am well aware not everyone has. This project is definitely easier with them than without but everything I describe can be done without them or with simpler tools. I will also include steps that I do that are not necessary in parenthesis() I was commissioned to build the Auron Katana by Lolita Zombie Cosplay and knew immediately that I wanted it to be light, yet durable. The first step to building any prop is figuring out what you’re going to make it out of. A lot of prop makers use light woods like poplar and MDF and while I have used some wood I decided it would be my first sword t
Read more