February 14, 2015
Happy Valentine's to all you lovelies out there! I hope you enjoy this year's mini featurette and stories!! Valentine's is a great day to celebrate with your significant other and remember the bonds between the best of friends. Without further ado, here are the cosplayers for this year and their stories!

Chii from Chobits wishes you the best Valentine's Day!

Chii here is cosplayed by the ever talented Sutie of Silver Fyre Studio. Her favorite part about Valentine's Day is the sweets and doing these fun Valentine's photo shoots every year.

Varrick and Zhu Li - Do the Thing!!

I had to refrain from squeeing loudly while at work when I saw this entry. We have Andrew as the industrious Varrick and his assistant Zhu Li, cosplayed by Ana. These two met and fell in love not only with each other's cosplays but with one another. Such a cute couple!! Andrew tells us about how they met and their costumes below. 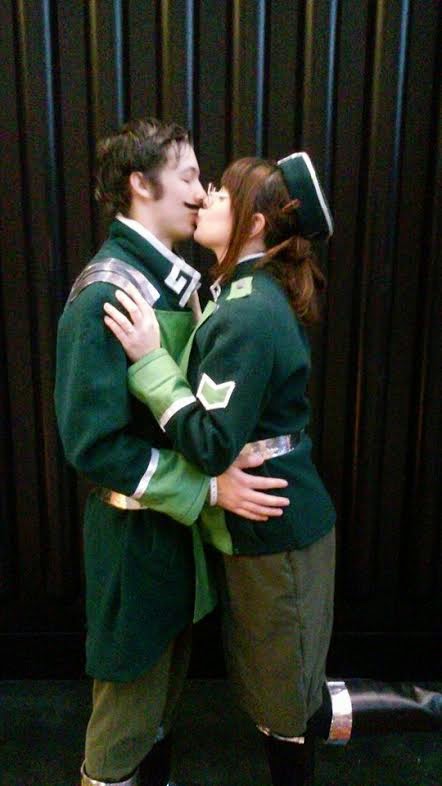 "Ana and I meet for the first time at the Salt Lake FanX Comic Con 2014. We both were dressed up in costume from the show Avatar: The Last Airbender. When we saw each other, and recognized the costumes, we took our first photo together. We also spent the rest of the con talking about our favorite show. Because of our costumes, and because of the show we meet each other for the first time, and later fell in love and got married. Varrick and Zhu Li are an adorable couple, Varrick is a crazy inventor, and Zhu Li is the worlds most professional assistant. We loved watching them get married in the show, they are a very fun and quirky couple." - Andrew 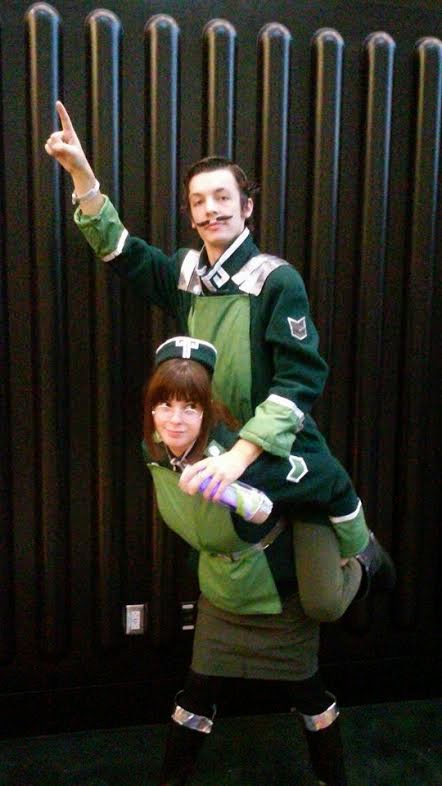 "The cosplays themselves where not to difficult to make. We where able to find 2 large coats that where almost exactly matching colors. After modifying the coats it was pretty simple to add all the little details, like the military patch, collar and cuffs and Varrick's metal shoulder pieces. The shiny metal pieces are aluminum tape, which is usually used for plumbing. I use it for everything metal like, swords, guns, props. This is my first time using it on a fabric like surface though, and I think it turned out great." - Andrew

I may not know Ranma 1/2 very well but these two look so adorable! Pastel Cosplay is Shampoo and John is Mousse.

"When we first met during a local show, we broke the ice by talking about video games and anime we liked. John mentioned he loved Ranma 1/2, which I adored, too! We had no idea that we'd be cosplaying it together four years later!" - Pastel

"I like cosplay because I have so much fun creating costumes and portraying characters that I love! John likes cosplay because it means we get to travel and make unique memories together. As a couple, we're always looking for new places to see, new things to experience and of course, new things to geek out over. Cosplaying at conventions is just the icing on the cake for all of those things!"

"John's favorite part of his Mousse costume is how comfortable it is to wear. He insisted on 'breaking in' his cotton-sateen wushu-style pants as soon as they were finished (in reality, he just really liked wearing them!). Pastel's favorite part of her Shampoo costume is her prop chuí and her cute wig from EpicCosplay." - Pastel

Tales of Grace: Sophie and Richard

Rachael is here as Sophie and her boyfriend Joseph is Richard from the Tales of Grace Video Game. These two are one of my favorite couples that I know personally. They are always so cheerful and are also so supportive of each other.

"We cosplay together because we both love cosplaying, both enjoy the tales of series, and enjoy our time together. Joseph and I met each other banzai of 2012 after the cosplay contest, he was shiny Lucario (ONE OF MY FAVORITE POKEMON) and I was Sophie. We got each others photo but we either forgot to ask or were too shy to ask each other for our contact information. Speed ahead one year later: I was Elise from Tales of Xillia and he was Richard and we both again were in the cosplay contest, only this time I didn't recognize him because the year earlier he had a mascot outfit on. He remembered me as Sophie the year before after seeing me up on stage (he told me that it was only because I was the cutest girl there, so it had to be me). We met up afterwards, talked a bit, and have been seeing each other and dating ever since!" - Rachael


"I like Sophie because she was so unique, fun to play as in the game, and a new challenge to cosplay (body suit with french seams and a backwards zipper to boot! I also thought her long hair would be neat to try out at the time. Joesph loves Richard because of the neat cape, huge sword, the fact he has long blonde hair, sorta like his, and all the cool details." - Rachael

This is always a classic pairing and I always love seeing Link and Zelda cosplayers! Link is cosplayed by  Le Grenier D'illiane and Zelda is cosplayed by Yuli. It makes sense to have cosplayers featured on here from the country of love, France! I adore these two. Their cosplays are amazing!

"As you nicely proposed a Valentine's featuring, here's a small photo of my cosplay of Link. During the convention, i met a lovely Zelda cosplayer and decided to make some photos together. Finally we became friends." - Le Grenier D'illiane


The dynamic duo from Goombah Squad is back again with another set of stellar cosplays... and probably my all time favorite fantasy paring from the Dragonlance series. Trena is priestess, Crysania, and Johny is Raistlin.

"We cosplay together because we love doing it!  We have always dressed up for halloween and it just seemed the thing to do as natural progression!  We have been cosplaying for 5 years now and hope to continue for many more to come!  It's not only fun to cosplay together, but we craft together as well.  Johny does all of the props while Trena does all of the costumes!" - Trena and Johny

"These characters are particularly near and dear to our hearts because DragonLance is how we met!  We were chatting on an online rpg based in the DragonLance world and we fell in love.  So when we decided to do these costumes, we knew that these two characters were the ones to do.  Their dynamic is so sweet and endearing, but at the same time heart wrenching.  It is so much fun to portray them together." - Trena and Johny

VFire would like to add a huge thank you to all the cosplayers who sent photos. You are all so amazing and I hope you have the best of Valentine's Days!!! Love you all! And thank you readers for sticking around. ;)