October 31, 2014
Happy Halloween! It is that time of year to don a costume and eat lots of tasty treats! The entries for this contest are really creative and fun. I hope you enjoy them as much as I did.

First up I would love to feature my mom! I was so excited when she said she wanted to enter the contest. Even more so because this costume has been a dream of hers for a very long time. She is Professor Minerva McGonagall from the Harry Potter series. 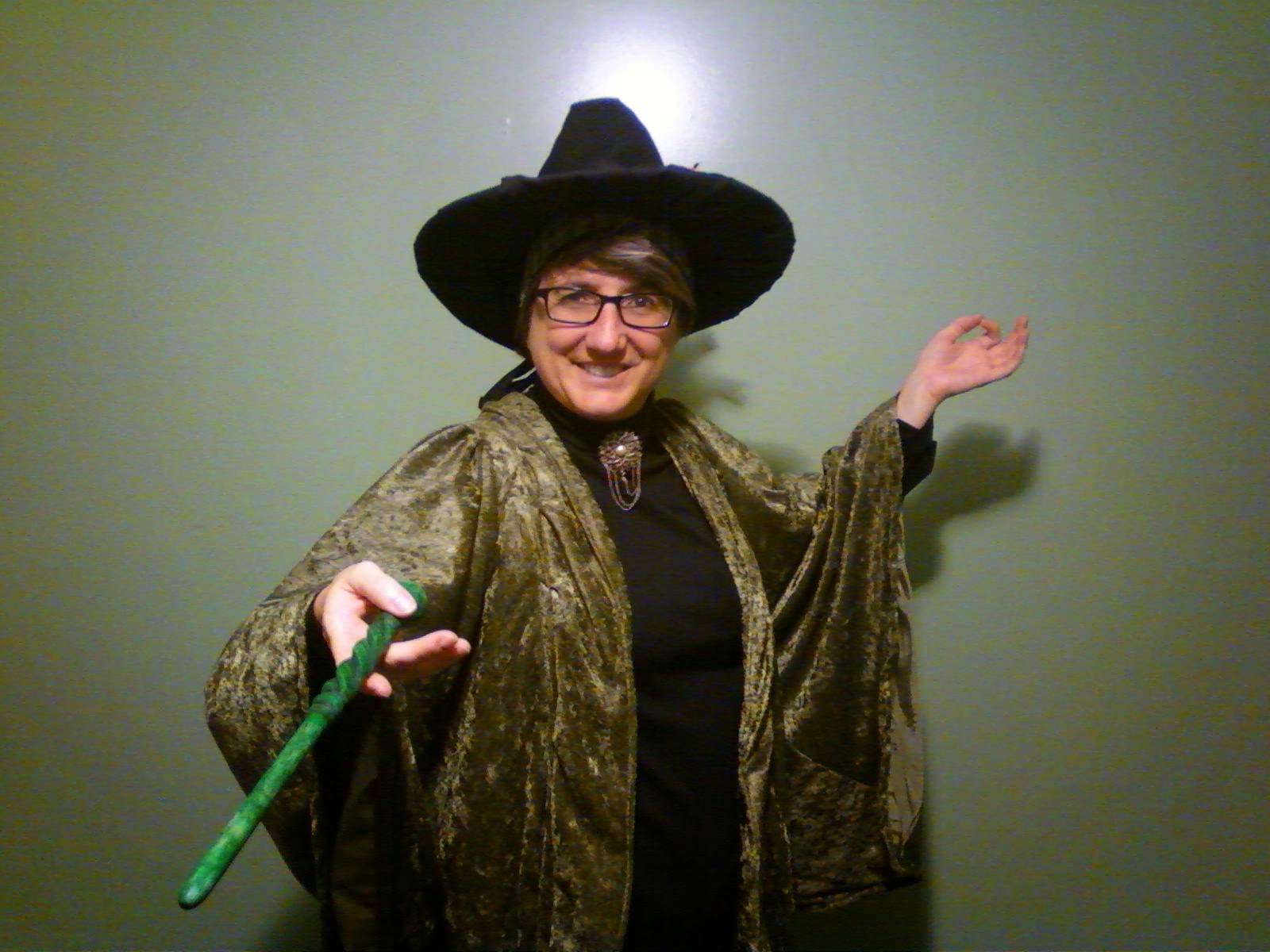 My mom chose this costume because one, it is a witch and my mom can cackle, like really cackle like a real witch. The other reason is that Professor McGonagall is the coolest witch in the series and she is a strong character. My mom has always admired her.
How was the costume made? I made it for her. I am especially proud of the hat, which has a regular store bought hat underneath it. My mom found the black shirt and added her own brooch trinket which really made the costume pop. I love her! (I might have to record her cackling for everyone, haha)

Next we have Renna Mira as Mephisto Pheles from the anime Blue Exorcist. She looks fabulous! Renna is a very talented creator and actress as well! She studied a bit of theater while in college and it really shows when she gets into character. 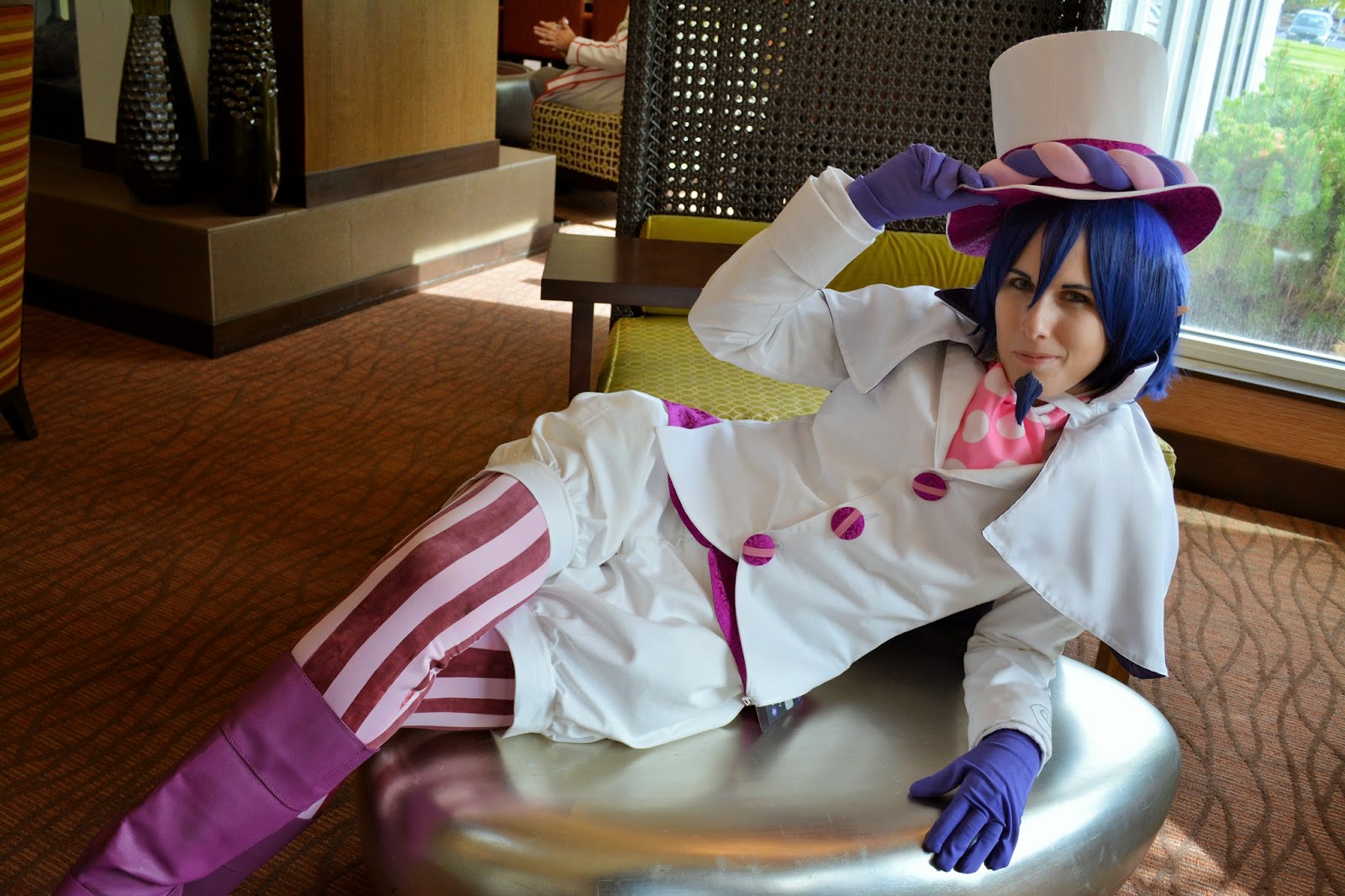 Why this character? He is a great character and would have a blast giving candy to trick-or-treaters.
How did you make it? I made everything! From the shoes (which I painted) to the top hat (which I made).

Here we have four year old Clinton as a Spider!! His aunt Sadee entered him and she made his costume. I love his logic behind choosing his costume. 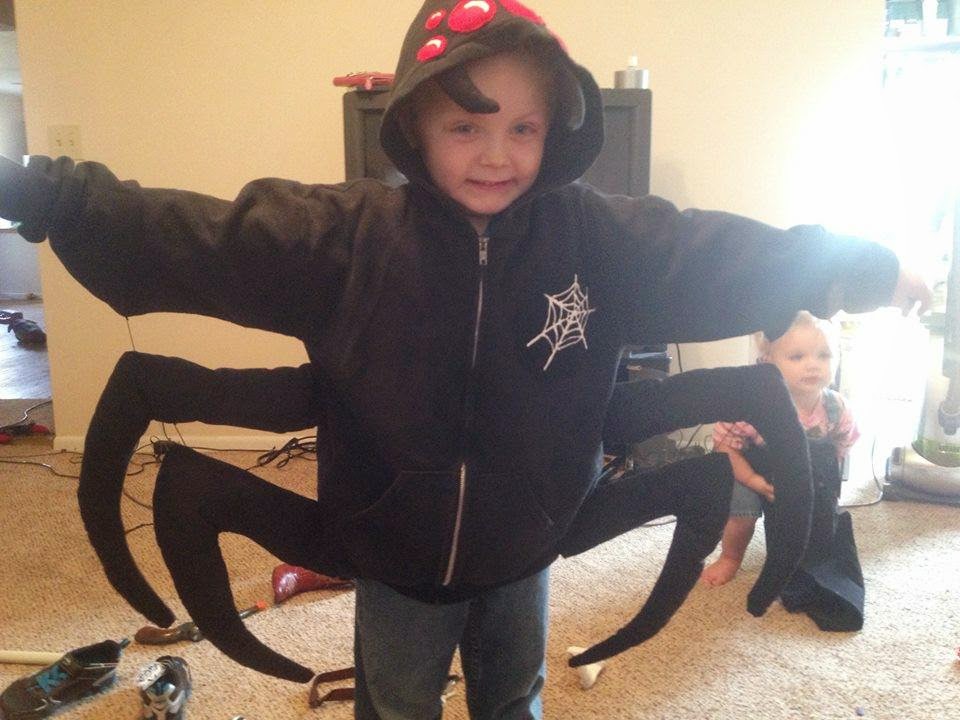 How it was made: Where we live it snows half of the time on Halloween so the base of the spider costume is a hoodie. The spider legs were cut to the shape they are in and stuffed before being attached to the arms of the hoodie. Eyes and a spider patch were made with felt and fabric paint.

I am a sucker for Sheik cosplays and one always seem to sneak into my contests as of late. Kai Anderson is wearing her Sheik cosplay from Ocarina of Time (OoT) and Hyrule Warriors (HW). 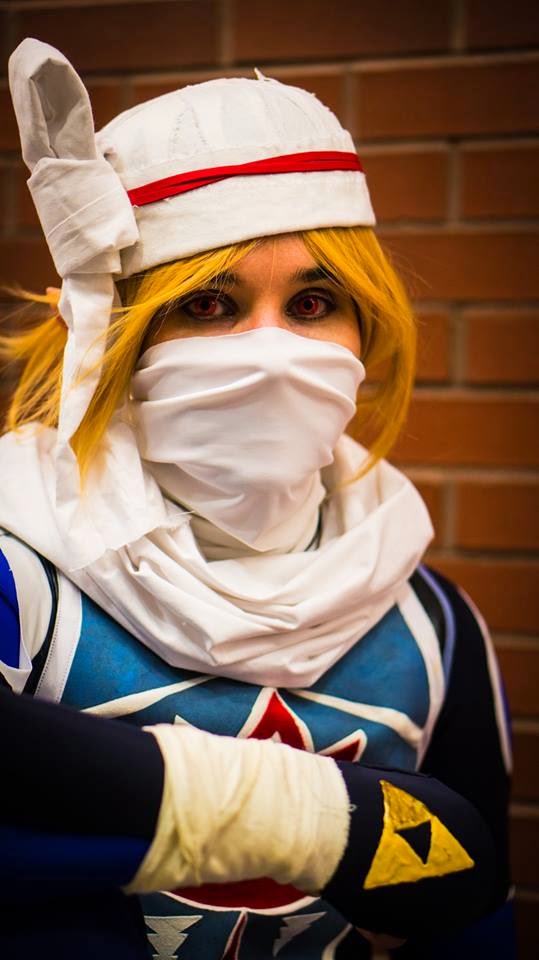 About her costume: I chose this character because Sheik is one of my favorite cosplays. This is actually a combination of HW and OoT because my HW version isn't fully completed. I made the tabard and cowl completely from scratch. I used a pirate hat as a base for the head wrap. The wrist guards and base outfit are the ones I used for my OoT sheik.

This lady is such a cool character to be for Halloween. This is MaryJane as the beautiful yet kick-A Eowyn of The Lord of the Rings. It is a really impressive costume. 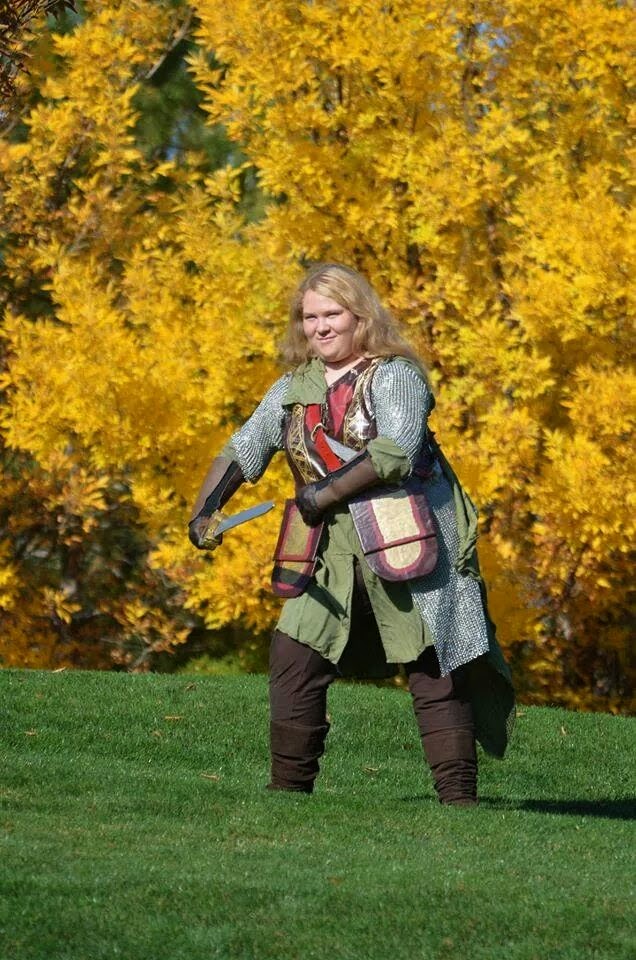 Why this character? I chose Eowyn because she is brave. Her biggest fear is a cage, and she wants to protect the people and kingdom she loves, even if it could get her killed. Yet at the same time, she is kind. She looks after Merry and those around her. She's my favorite female character from the series.
How did you make it? I made almost everything in this costume. The only thing I purchased was the boots, and my cousin made the sword. The chainmaille is 1/4 inch aluminum jump rings woven together, and what you see took two month to make.

Check out Shelby as the Dragonborn from Skyrim. The first time I saw this costume I was blown away (Pun may or may not be fully intended... FUS RO DAH!) 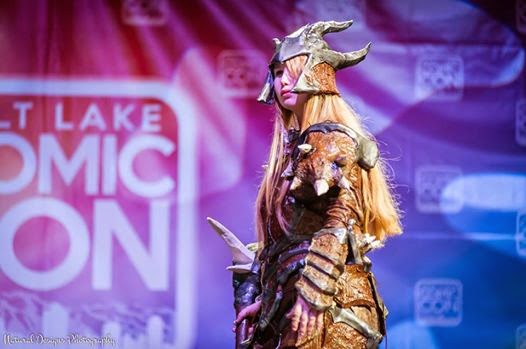 About this costume: Skyrim is my favorite game and making the armor was such a labor of love that I just had to wear it outside of the conventions I had initially created it for. The dragonscale armor is my personal favorite in the game and I feel so hard core when I'm all suited up. I made all the armor using pepakura and paper mache clay and then I hand painted everything with acrylics.

Rachael has beautiful craftsmanship and made all the beautiful details in this costume. This character is Catheana from Shining Force EXA. Truly amazing work. 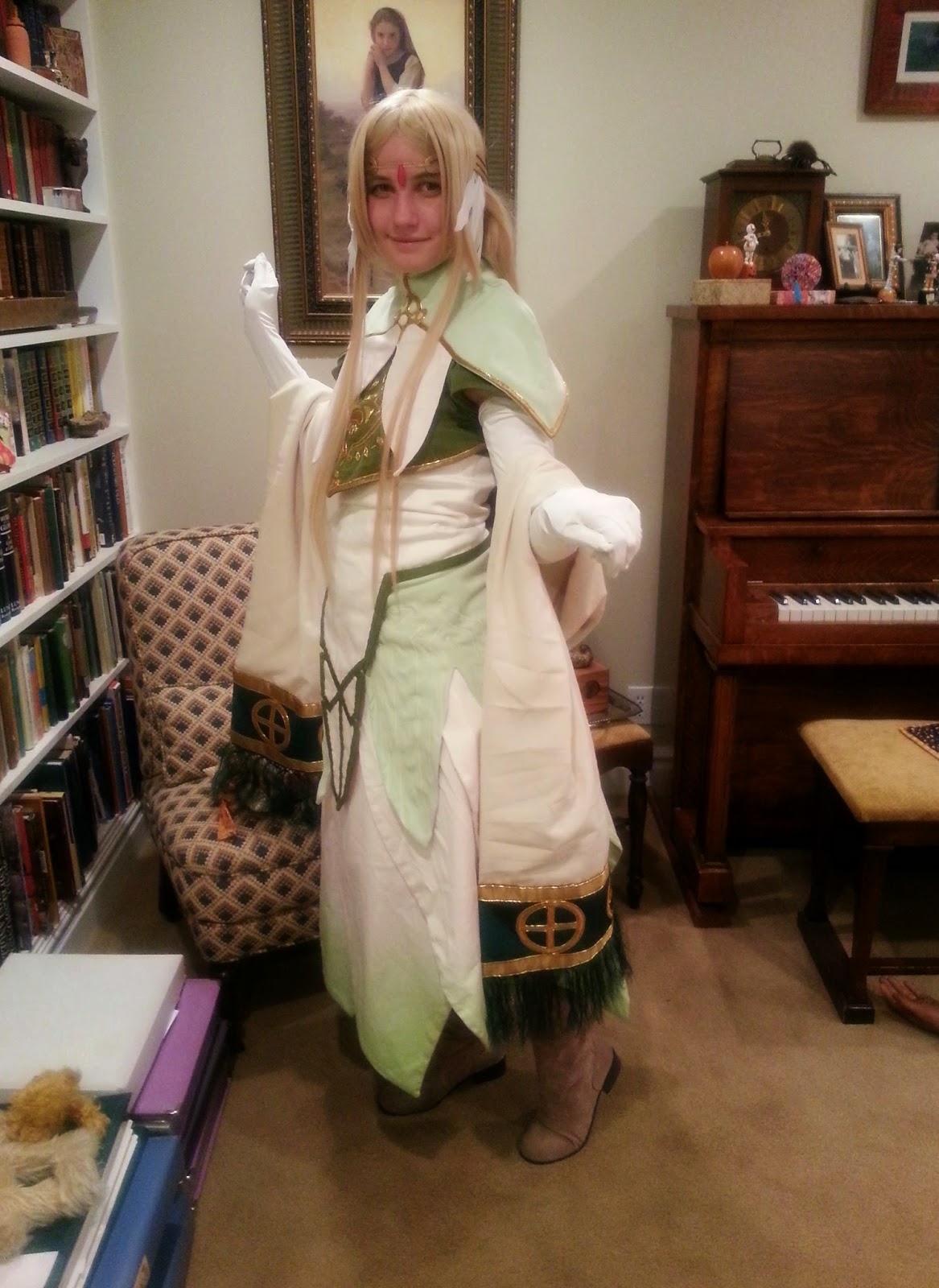 Why did you pick this character? I chose Catheana because when I first saw her in my art book I fell in love with her unique design and intricate designs. Most of them being hidden completely from view in almost all forms or artwork, but I knew she just had to be shown to the world to be enjoyed by all who didn't have the art book or other Japanese only media.

Rachael did send in how she made the costume, but let's just say I am going to save for a future "How it was Made" post (It was the length of a term paper, which was very cool.) Keep an eye out for her in the next few months!


And now for the Winner!!

The moment you have all been waiting for. Who will win the prize out of all these talented and awesome contestants! I apologize for the dark video... but then it is Halloween. Ooooh. Watch the video to find out the winner... *drumroll*


I will contact winning peoples sometime in the next few day. Thanks for reading!!