January 01, 2014
Happy New Year World! The last year is gone and now a new year is full of hope and surprise. The Salt Lake Comic Con Committee had a costume contest for the new year and I attended it to see what fun costumes I could find. What I really enjoy about costuming is all the different ways something can be made and the great work put into it. Even if you buy and modify the costume a little bit, it is always fun to see the pride a costumer has in their costume.

Before we get started with the mini interviews, just a quick note: The Cosplay Stitch and Seam will be under construction over January, so there will be no month feature. I am hoping to add some new categories and fun articles for the blog for this new year. Monthly features will resume the first Monday of February! Also note: these pictures were taken by me and I am not very good at photos... so sorry if they are not the best quality. 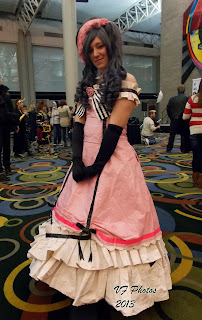 First up on the list is Niru as Ciel Phantomhive. As soon as I saw her outfit I had to ask a few questions. This cosplay took her about a year to make, with a few months to take a break. This entire outfit except for the gloves, wig, and eyelets is all made out of duct tape!! When I asked her why she chose duct tape she replied that she loved the stuff and was aiming for the world record in things made of duct tape. This is her fist duct tape cosplay, but she has made a duct tape prom dress and other smaller things.

Next we have Jason Craig West as Link from Twilight Princess. Most of his cosplay is bought, but he modified many parts to it. The undertunic he made himself so he could accurately have a tan undertunic, instead of the white that came with his purchase. The chain mail is really impressive. He took 12 gage copper wire, wound it up, and cut his own chains. He then tied the chains to another shirt so it would like a full chain shirt, but without the added weight. Jason also added craft foam emblems to his modified gloves. 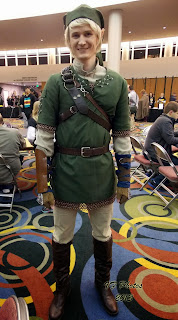 The Zelda costume was also made by Jason. Usually you see the girl making and dressing up the guy, but in this case it is opposite. Jason has graduated with a Theatre Degree and enjoys acting and creating costumes. For Zelda he bought a dress and modified it to fit the design. He made the armor and earrings for Zelda as well. 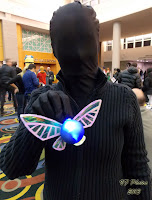 The third member of their party is Navi of course! Navi is made up of a blue ornament, LED light, and crafted plastic wings.

Not all cosplays need to be hand crafted. Jason and Jacky, dressed as Roxas and Sora from Kingdom Hearts, bought their costumes and props.
"I have more money then I do time. I still have fun with my cosplays all the same!" Jason said as he disassembled his keyblade for me. He made his own keyblade and added bigger black squares to his Roxas jacket, but he said he liked how the bought costume turned out.

Fiona, dressed as Loki from the Avengers, had a small budget and really knocked her cosplay out of the park in my opinion. She created a duct tape helm and bracers. the helm was the hardest part for her. It is made of paper and wire and covered in gold duct tape. Her cloak and clothing were just items she found around the house that happened to match the colors of Loki very well. Low budget cosplays are always a challenge but they can be the most fun to create!

Last but certainly not least is Olivia and her family. Olivia came dressed as an Ewok Warrior from Star Wars. I have to say, she is the best Ewok ever! She took home the second place prize and for good reason. Her mother, put together the costume a few years ago. the fur is actually a blanket she found! She said it cost less than buying actually fur fabric, and it looks great! Olivia actually had the chance to meet Warwick Davis, who is one of my favorite actors and he played Wicket the Ewok. I may be a little jealous. That is so cool!

The contest came and went with some great winners. I was not able to catch all the winners but here are some of the other costumes that entered. Looking at all these costumes has me excited for new cosplays and creating fun things! What are your new years resolutions? Maybe these great costumes can help you decide on your plans for 2014. Happy New Year!