September 15, 2013
"Tatsue has some mad skills with craft foam. Almost all her costumes have craft foam in use somewhere in the mix of materials. She created Zhao Yun's armor, Dynasty Warriors 7, on a strict college budget and made it look very realistic. This shows that a little bit of creative energy and thought can go a long way to keep your wallet from feeling empty." - VFire

While I was making this costume, I was both a poor college student and a starving artist, so I didn't have too much money to throw at a costume, so my goal was to make something under $50 but still have it look good. I had never made armor before (besides Terra's pauldrons that were just slightly curved unimpressive pieces of craft foam with felt on the underside) So, using only craft foam, glue, and some rub-n-buff, this is how I made cheap armor that doesn't look like crap!

First I started out drawing out the shape of the armor on a piece of paper and fitting that over a duct tape double that I made of me (with binding because I crossplay more than anything) to make sure it was how I wanted it. I then transferred that over to my 3mm roll of craft foam and cut out two identical pieces (since I didn't have 6mm.) And then glued them together to make a more sturdy piece. 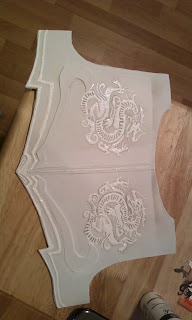 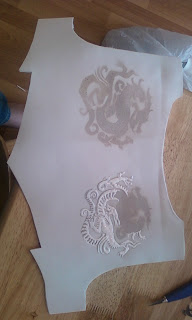 You can see here that I have cut the front and have spray painted the design of a dragon on either side
The design was scanned from the Dynasty Warriors artbook and scaled to the right size, printed on card stock, carefully cut out with an exacto knife, and then used as a stencil on the foam.
I then went in with a steady hand and some 3D fabric paint and drew in the design. This hurt, and I could not use my hands properly for a week (there are 6 of these total.)

After the dragons were finished and dry, I added strips of craft foam to do the rest of the detailing, as well as a bit more 3D paint as well. And then I moved on to the back and did the same.

At this point, I have to shape, stabilize, and seal the foam.

I had my duct tape dude at the ready, and using a single burner of my stove, I carefully heated up the foam and once it feels like leather, I placed it on my duct tape guy, and pressed it evenly over the curve of the chest using a pillow to get fairly even pressure. Once it cooled, it keeps its shape pretty well.

Now, everybody knows that craft foam is not durable at all, so to make sure it didn't rip or whatever, I had to put some crinkle gauze on the back.
First, I coated the back with Elmer's glue. Then I laid a layer of crinkle gauze, not worrying yet about cutting it to the right shape. That can come later.
Once that dries a bit, I will slather more Elmer's glue over the back until the crinkle gauze is well covered. And then it needs a couple hours to dry.


To seal, I used a mixture of Elmer's glue (or maybe mod podge or both), flexible fabric glue, and water. You mix the concoction all together, and start painting it on carefully over the foam. Between each coat, you want it to dry fully, or the glue will do bad things. I probably had a good 8 coats on the armor before I thought it was smooth and strong enough. It takes a while...

There are many things I could have used to paint this. Like, spray paint probably would have been easier, but that tends to chip and stuff, so I usually use this stuff called Rub-n-buff, and you can usually find it in Michaels or Hobby Lobby or other craft stores (never seen it in a Joanns, though) You can find it near the gold leafing stuff... which is usually near the wood and framing crap, though I could be wrong (As I haven't needed to buy more for a long time)

Using a paper towel (or my fingers because who cares about having a natural skin color?) I simply rubbed this stuff all over the sealed armor. The more friction you give it, the shinier it can get. But make sure to rub well, or you might find that you've missed a spot and you'll get this stuff all over everything, which is also why a final layer of that glue concoction is not a bad idea. 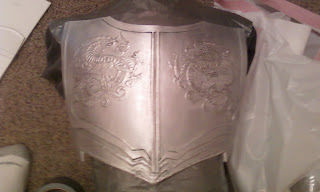 Then of course I need to do closures and such.
I cut out little strips of that fake leather that Joann's carries, and made straps to connect the front and back. On the sides that fit under the arms, I punched holes and placed grommets in for lacing.
There is also a pauldron that needed to be attached, and needed to be removable for transportation and such. So, I had to glue/press/punch/struggle with putting in snaps. You know, the ones with the evil little teeth that you press (hammer) into another piece to make it stay? Yeah, those ones. But I didn't always want them to show through, so with some of them, I just slathered some e6000 on the back, pressed the teeth through the foam, and prayed that they would stay in place (they have.) That way, you can't tell there is a snap there. See? 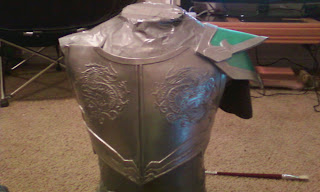 That is how I made my cheap armor that doesn't look too bad.
The same process was used for the thigh bits, the bracers, and the boots. 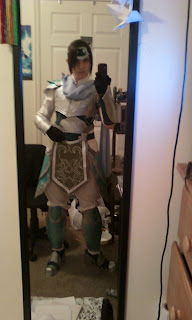