September 09, 2013
This past weekend Salt Lake City, Utah had its very first and very own comic convention, Salt Lake Comic Con. It apparently is the largest opening comic convention in history with about 70,000 attendees total. It was a fun convention and it certainly had its pro's and con's but I delighted in asking a few cosplayers about their work! Check out the fun cosplayers and the cool things they did to create their comic con worthy cosplays! 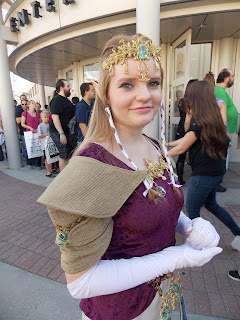 First up we have Caroline as the lovely Princess Zelda from the "Legend of Zelda" game series. Caroline made the pauldrons out of a soft material so she could move easily and not worry about the piece breaking. Her jewelry is made of glass beads, gold wire, and gold decorative plastic. The plastic was part of a larger design that she cut up into the right shapes and put fabric on the back to keep them from snagging on the fabric. Overall this was one of my favorite Zelda cosplays! 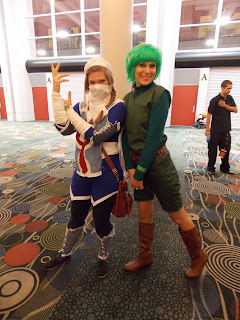 Next we have Morgan and Renee as Sheik and Sariah, also "Legend of Zelda" characters. The blue part of Sheik's costume was actually a dress they bought form the thrift store! They modified it into a body suit with shorts. On Sariah's costume, the green tunic and shorts is actually made out of curtain materials. Sheiks also used curtain materials for her tabard and shin guards. I love the texture the fabric has. Great choice ladies! 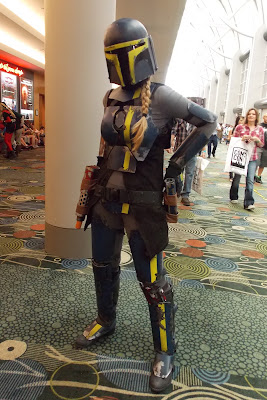 Lady Merc made her very own Mercanary from the popular movie series... need I even name it... "Star Wars." She used a Pepakura model for creating and sizing the helmet. She put fiberglass on the inside and bondo on the outside to strengthen the paper model. She has a large sunglasses lens for the viewer. The rest of the armor is made out of PVC pipe! 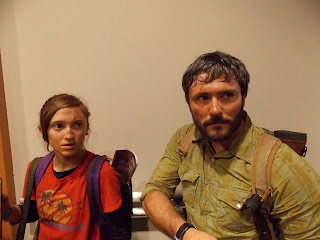 Ryan and Jessica are portraying the characters Joel and Ellie from the video game "The Last of Us." Ryan says it is easily the second best video game of all time. Their idea for looking dirty and scuffed up was genius. They used tomato juice and chocolate drink mix! These two won second place beginners in the cosplay contest for their amazing skit on stage. I wish I could have seen it! Congrats! 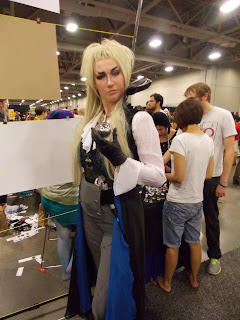 Amberlee here is sporting her best goblin king sneer as Jareth from the movie "Labyrinth." If you have not seen that movie, watch it. It is worth it believe me. Amberlee chose to make a female version of the goblin king. She did not know much about sewing before making about 85% of this costume, and she did an amazing job. I cannot boast I could sew as well without instruction when I started. It took her three months to make this cosplay. The jewelry and scepter are both made out of sculpy and eventually she wants to cast them out of real metal. 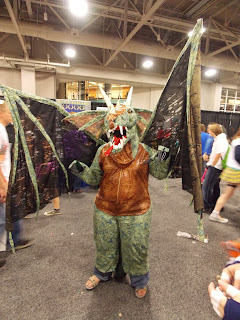 I was not expecting to see any full size dragons at comic con and this one literally blew me away. This Dragon was designed and created by Liz Campbell. She is a fantastic artist (her art blog page here) and she constructed this costume out of floral wire and duct tape! She also used materials like a dream catchers hoop, peter pan hat, and a special quilting fabric for the beautiful outer layer. She designed the wings to be big and she succeeded in making them a great size and mobile at the same time. 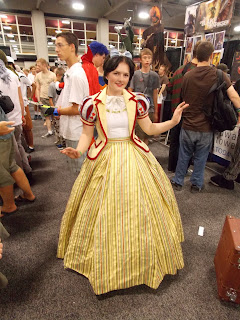 Kim Romero of Mushroom Pixie created this "Pocket Princess" inspired Snow White. This version of Snow White is a Dr. Who version. The entire dress is hand made and the sleeves have embroidered hearts and question marks. The dress is made up in parts so Kim can wear the pieces separately with other outfits.