May 21, 2013
I apologize for this post being so short, but I have been very busy with plans for June. I realized I needed to post my review for the Salt Fest, so here it is!


The Salt Fest gaming convention was a lot of fun. For a first time convention they did a great job in picking a location. The University of Utah has a great Entertainment Arts and Engineering program (which I am majoring in) and the con goers were quite the crowd. I was not able to make any panels, except one on Pepakura by Aaron Roth. I need to learn more about papercraft and get crafting! Aaron's work is very well done and so professional looking. I won't say more and leave the surprise for later since he will likely by my July feature.


It was a great opportunity to meet new faces and see some of the games the University of Utah gaming program is working on. Namely Tripleslash Studios! Their game "Magnetic by Nature" was really addicting and I need to figure out how to be a beta tester for them, yes. Beautiful and fun game. You can check them out here: Tripleslash Studio Facebook Page
﻿
My artist table did pretty well... despite not having anything to sell. I printed out some pictures of my prop work and opened up commissions. There were a lot of people interested in things like custom keyblades, assassins creed armor, more keyblades, and so on. I did have a small sample in things I was going to make and sell and there was a good interest in the treasure boxes and mini bookmarks, so next time I will make sure to be prepared.
﻿﻿﻿﻿﻿﻿﻿﻿I shared the table with Kikikabuki cosplay, which was a real treat and she is as sweet as ever! I made some new friends at the convention and after seeing all the great cosplays, I am inspired to finish my Sheik cosplay. Sheik was put on hold because she was getting very difficult to create. I have some fresh new ideas to fix the problems now thanks to some advice from some leather workers. 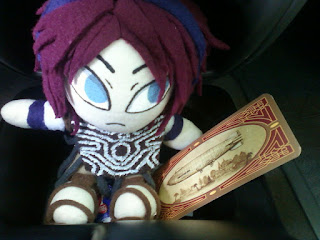 Is he not angry and adorable!!!