March 05, 2013
Talk about being spoiled over the weekend. Northern Utah is freezing but St. George, Utah... 70 degrees F all weekend long. I totally walked around in shorts and sandals. Awesome! 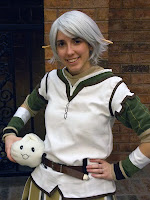 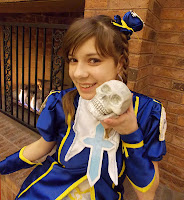 When it comes to conventions Fannatiku is small but it has spunk and has easily become my favorite convention. I have not been to a convention so down to earth and entertaining. I was able to relax and enjoy the atmosphere, and most of all, it was easy to find my friends. I didn't have crowds to search through or shout over to get someone's attention or a myriad of events to choose from. It was simple and I loved it! 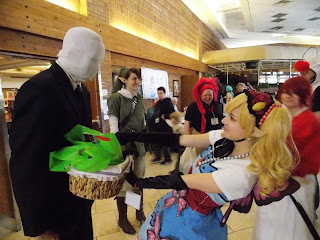 Slenderman!!! Agitha is warding him off with her picnic basket!
Photo by Vfire

I want to give a shout out to Sarah Hall for her help and awesome job with the events. She was always so spunky and full of energy, even with her broken knee! Sarah and the all the Fannatiku staff were very helpful and excited about their jobs at the convention. I give Fannatiku an A+ for convention spirit and energy!

We woke up bright and early at my grandparent's home and jetted off to the convention. The long drive from last night was behind us and we were ready to go. My sister, Lexus, and my friend, Camille, donned our cosplays and headed out. I was dressed as Captain V. Feuer, my steampunk character for the Salt City Steamfest. I really need to work on my steampunk clothing... but V. Feuer recruited many volunteers for her crew for the Fest and promoted the Steam Fest! (For those who do not know, I am the volunteer coordinator for the steamfest.) I did not come home with any fliers! Success! 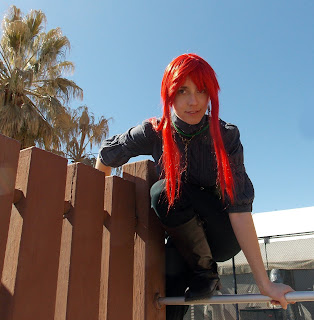 Captain V. Feuer is playing around. I need to work on this for SteamFest some more.
Check out the Steamfest here!!
Photo by Lexus

I stopped by an applique panel and learned a really cool trick! Expect some applique in the future. It will be amazing! As for other panels... well I mostly wandered around the convention chatting with old, and new, friends.

In the middle of the day I returned to my grandparent's to get ready for the Wonderland Ball. My cousin Cricket came and visited. She is so adorable! Look at her smile! 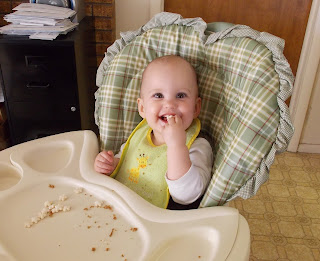 
Once we were dressed we headed to the dance as Break, Sharon and Alice from Pandora Hearts! Now I am not one for attending Formal Balls, or dances really, at conventions or anywhere else. I just don't dance. Now Rufus's Cafe hosted the dance and, Wow, that group can dance! And most importantly, they got me to dance! And it was fun! My favorite part was when my sister was trying to teach my the guy's steps to the waltz. I kept messing up so I just picked up my sister around her waist and walked away. She thought it was funny. I also danced with Emily (Break's creepy doll that sits on his shoulder) and had a doll dance group going on (yes, Break is not the only one with a doll for a pet). I think that was best dance I have ever been to!

Other than dancing and having fun for once at a dance I had another first! I... uh... it is so funny, but so different at the same time. I was named Wonderland Ball King. You may now imagine me chuckling. My first thought when they announced Break's name as king was, "But I'm a girl!" To think I could never get Prom Queen in high school, but later I get King! Works for me. I wore my crown upside down and my mad hatter hat backwards for the rest of the night in character. 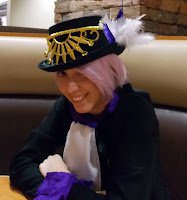 Dance King... who would have thought?
Picture by Camille Tanner
Day Two:

Waking up I realized I had not finished my cosplay for the Masquerade yet. I had spent the night slowly stitching and talking with Camille and Nivi. Nivi arrived late in the night to come check out the convention so my grandparents offered her to stay the night. We all scrambled to get ready and took off to the convention.

Lexus and I started as Ordon Link and Agitha, but I don't think many saw us because I hid upstairs to finish sewing some patches. I did show face for a panel on hand-stitching and embroidery. I only expected maybe one or two people to show up because chess was going on at the same time and it was early in the morning on Saturday. I had about ten people show up and they were all wanting to learn how to sew. My grandmother, bless her heart, gave me a bunch of scraps to take with me to the convention so I could have attendees try out some stitches. It was a hit! I might expand this panel for other conventions in the future. 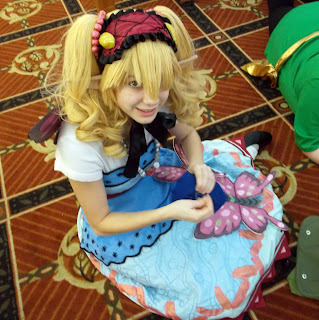 Lexus learned to handstitch! She is helping me finish Doll's patches.
Photo by VFire

I really wanted to see Precious Cosplay's panel on Advanced Cosplay, but due to me not finishing my patches the night before I missed it. I did run into Precious now and then and she is really nice. I hope I meet her again in the future and maybe get a chance to chat more. Maybe a little more courage to chat more too. Her work is really amazing!

The cosplay contest came around and the competition was rough!  From flowing gowns to amazing props, and even a giant Dwarf with a huge gun! I am in line to go on stage and my friends Kimi Ushio and Kame go on to their skit. They performed, "Anything you can do," with revised lyrics as the Ouran High School Host club and Lobelia Academy characters. It was amazing! So well rehearsed and very well done cosplays. I stood there when it was my turn and thought... "My stage presence sucks!" Kimi and Kame really hit it out of the park. You can see their skit below. Keep an eye on my Facebook Page for more video links.


"Anything Boys can do, Girls can do Better"
Best in Show

In the end I took a ton of notes on how to improve my stage presence.. and frankly my skit writing. My sister and I did alright for our walk-on. A special thanks to Camille for helping with the audio and voicing the system warning. I have plans, so many plans, for improving.


On the upside Lexus and I took home Best Veteran Cosplay! Yay! Kimi and Kame took Best in Show! Shannon (Pannon) took Best Individual Cosplay with her Mad Hatter Lelouch! Her walk-on was amazing too! She did Magic! ﻿﻿﻿

That pretty much sums up the convention. Fannatiku is small but I love it! Small and large conventions have such different atmospheres to them. Fannatiku is certainly my favorite convention and I look forward to going again next year!