Happy New Year! This month's Cosplay feature is none other than Nikki, aka: Kiki Kabuki! 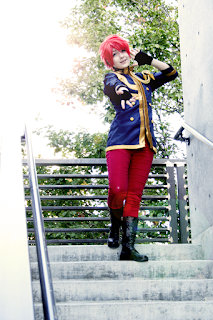 Nikki as Ittoki from Uta no Prince-sama.

Over the past few years I have had the honor of watching Nikki grow as an inspirational cosplayer in the cosplay community. This past week she competed at Anime Los Angeles (ALA) and took home two prizes for her Seto cosplay from Fragile Dreams. You can see her performance in the video below. She won Best Workmanship and Best Individual Presentation.

Nikki as Seto from Fragile Dreams: ALA performance

I chose Nikki as a feature for the new year because of two things. First, she started this year with a bang at ALA. Secondly, my new year's resolution has to deal with stage presence and this girl has it down so well.The thing that impresses me most about Nikki is her stage performance. She is incredibly talented and knows how to impress the audience. Her ALA skit brought some in the audience to tears.

What or who got you started as Cosplayer?

I'd seen it done online here and there, and wanted to try it out for myself! A sense of "wow, that looks really cool! I want to bring my favorite characters to life, too!" I altered some thrift clothing, made my first costume, and went to one of the conventions my friend attended. And from then on, I never quite stopped!

I like to ask this to all the cosplayers I meet. How did you come up with your cosplay name, Kiki Kabuki?

When I first started cosplaying, I didn't really have a unique cosplay name, but as I got further into the hobby and wanted a more personal screen name, I came up with Kiki Kabuki. The "Kiki" part being a nickname I've had all my life, stemmed from my baby siblings who couldn't pronounce "Nikki", and "Kabuki" being from how great an influence the Japanese Kabuki theater was on me for many years. 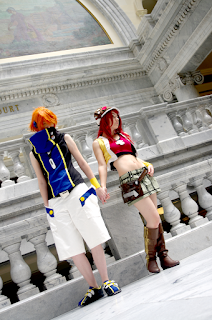 Megan as Neku and Nikki as Shiki from the Nintendo DS game The World Ends With You.

What would say is your specialty in creating a cosplay?

Really, I would say my sewing and prop work are only mediocre. My greatest pride in my work is probably how quickly I get things done. Almost all of my costumes have been completed over the course of just one day. I'm not particularly great at any one thing, but I'm always working to improve in every area I can! 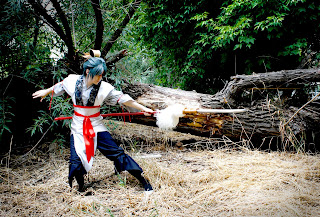 And you most certainly do! One thing I know you are very good at is stage presence. You really own the character and do a great job as an actor. Have you any advice for starting cosplayers who want to get on stage?

First things first when it comes to being "in-character": You don't have to BECOME the character, to PLAY the character. All you have to do is KNOW them. What I think matters most with portraying a character for a performance is to analyze their reactions to things, body language, and characteristic, and then use what you've learned from that, to act similarly. Forget the crowd is there, and imagine you're in that characters world, that you /are/ that character for the few minutes you're performing onstage. And it's alright to mess up-- as long as you recover from the mess up in a way that you think your character would! Rehearse lots beforehand to make sure the character feels natural to play out, too!

Legend of Zelda: Return of the Zeldurps with Nikki as Blue Tunic Link.

What has been your favorite cosplay moment?

It's difficult for me to name just one moment, because every moment I spent meeting people at conventions, or performing in my costumes, is just as thrilling and meaningful to me as the next. The greatest moments in cosplay for me in general, are the moments when I've slaved over making a costume just right, and someone recognizes the character, approaches me in tears and tells me that I portray their favorite character perfectly. That someone else feels just as strongly towards a series or character that they become overwhelmed with joy just seeing my handiwork towards it. Those are the moments that make all the stress pay off in the end -- when a person hugs me and sincerely thanks me for what I do. 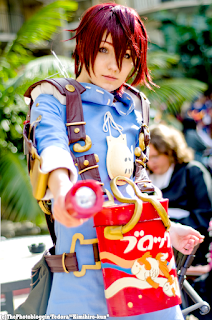 I am very curious, how did you make different parts of Seto's cosplay?

The red barrel in the front was completely craft-foam, Painted a dozen or so times, I hand painted the symbols and swirls on, and then had help from Tophatting with hand-painting the little fishies on the front! I still can't thank her enough for that. I have such an unsteady hand so details like that are difficult for me!
The fannypack was suiting fabric lined with craftfoam to hold it's shape, and craftfoam for the circular-clasps.
As for the little robot, ("Personal Frame" is her name), she was crafted completely from craft foam, and each of her buttons was hand-made from hot glue. I modpodged and painted everything and then added the little handles on the sides using the handles used on dangling ceiling-fan switches. The wire was glued on and then the speaker piece painted to look 3D.
All the buckles and smaller pieces were made from either craft foam, styrofoam, hot glue, or clay, depending on how heavy, flexible, or durable each separate piece needed to be depending on the weight it held up. And then a good portion of the leather-workings HAD to be hand-sewn.
It was a long and tedious process that consisted of a lot of trial and error. 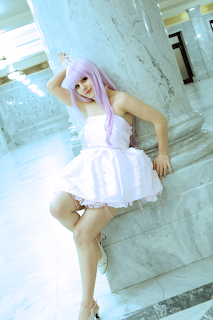 And last question, what is next?

Next up, you'll be seeing another big project-- Yurick, from the Last Story!